skip to main | skip to sidebar

VANDERBILT AND DEKALB in BROOKLYN! 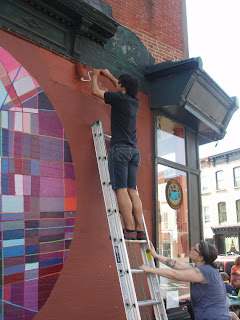 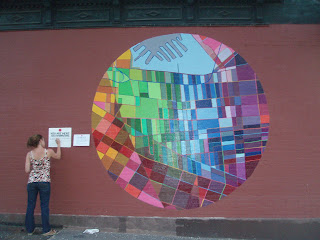 Thank you to Angela, Craig and Gabrielle!
Posted by Ellie Balk at 10:58 AM 1 comment: 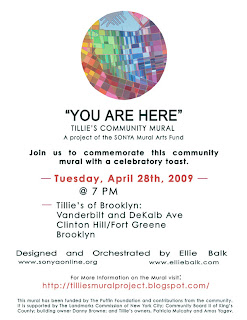 ADD YOUR DOT ON TUESDAY!
Posted by Ellie Balk at 4:34 AM No comments:

Barely maintaining balance at the top of a painters ladder, with a steel ruler in one hand and a graphite pencil in the other, Ellie Balk, 31, an artist from Clinton Hill, fixed her eyes on a 9-foot white circular canvas she painted the previous night on a bare red brick wall at the corner of Dekalb and Vanderbilt avenues in Fort Greene.

Reminiscent of a full moon at dusk, the canvas is the outline of Balk's latest community mural, a map of Fort Greene and Clinton Hill, with Grand Army Plaza to the south, the Brooklyn Navy Yard to the north, DeKalb and Nostrand avenues to the east, and Atlantic Avenue and Hoyt Street to the west. "Just a little bit of Prospect Heights and a touch of Bed-Stuy" is how Balk describes the mural's outer bounds.

Located in the Fort Green Historic District on the eastern wall of Tillie's of Brooklyn, a local coffeehouse and mainstay of the Fort Greene arts community, the mural is a community collaborative project, a thread that runs through all of Balk's art.

Balk, who lives in a studio apartment half a mile from Tillie's, aims to bring together community members who would otherwise not interact, particularly long-time residents of the neighborhood with newcomers. "Seeing how close we are to each other inspires people to be more accepting. It helps people connect," Balk said. "When you talk about where you live, you are putting your guard down," explained Balk. She has used murals, and specifically map murals, several times before with city public school students as a tool to foster common ground among peers.

Balk independently developed the mural's vision and design, but has recruited friends and volunteers, many of them impromptu volunteers, to help with the painting throughout the week. As a capstone to the project, community members are invited to paint a dot on the mural to mark where they live this Saturday.

"Now at least I won't get lost," quipped Diego Campo, 30, a flamenco guitarist and music producer. "But there won't be any street names," responded Selena Hounds, a graphic designer from Harlem and Balk's friend, stationed at the curb behind a bulky overhead projector displaying a transparency of the street grid onto the canvas.

Indeed, the mural's model, resting on the brick wall, is a wordless mixture of deep reds, blues, purples, and greens, each shade delineating one neighborhood from another.

The mural project at Tillie's is the product of a year's worth of effort, from grant proposal applications to direct fundraising, as well as community board and Landmarks Preservation Commission approval hearings, all driven by Balk.

"This project has gone through every possible review," said Kathleen Hayek, Fort Greene resident since 1994 and President of South of the Navy Yard Artists (SONYA), a community arts nonprofit organization, and a fierce advocate of Balk's project, referring to a close 8-6 Community Board vote and the Landmarks Preservation Commission unanimous vote in approval of the mural.

Hayek and SONYA teamed up with Balk to create the SONYA Mural Arts Fund, an initiative spearheaded by Balk that will support public art and mural projects in Brooklyn with a focus on education. "It fits SONYA's mission perfectly. We are looking to take this to the next mural," said Hayek.

Balk first contacted Hayek for assistance in gaining community support after enduring a mixed reception to her mural proposal at a Community Board 2 meeting and receiving angry emails from community members. Some residents feared that approving Balk's mural would lead to a bombardment of mural and public art projects on the Fort Greene Historic District, according to Balk.

The fear of changing building facades is just one symptom of a powerful undercurrent of concern with the changing face of the neighborhood. The limited contact between long-time residents and newcomers is in no small part related to this concern. "I don't know the new people. It's an upscale crowd. I wonder who some of them are," said John Oliva, 60, an MTA track worker and Fort Greene resident since 1975, as he observed the mural painting with reserved curiosity last Friday.

Newcomers have demonstrated a clear interest in claiming a stake in the neighborhood's identity. "You have to make your home your own," said Dave Maziarz, 24, an employee at a photography agency. "This area was made a historic district because it is still relevant. [To stay relevant,] it must continue to reinvent itself," noted Sheila Akbar, 28, a Ph.D. student in comparative literature at Indiana University.

Despite initial reservations from some, neighbors who passed by the painting could not help but stop and take in the scene. All afternoon, passersby slackened their pace along DeKalb and Vanderbilt to comment, inquire, and even to volunteer. "It's like a whole new world," remarked a man in a leopard-print shirt and a red trucker's cap, while a couple power-walking in sweats shouted, "Yay, we love maps."

Afternoon settled into evening and the projector's light gained prominence. A pair of walkers could not resist the urge to make shadow puppets by the light of the projector. A few others peeked around the corner to see if a movie was being shot. Small crowds formed and dissolved, made small talk, and pointed to where they lived on the emerging mural. Balk had accomplished her mission.

Tillie's of Brooklyn is located at 248 DeKalb Avenue in Fort Greene, Brooklyn. For more information on the mural project, go to http://tilliesmuralproject.blogspot.com.
Posted by Ellie Balk at 2:24 PM No comments:

Thank you to everyone who came to participate in this event.  A dedication ceremony is in the works for late September early October.
Posted by Ellie Balk at 5:04 PM No comments: 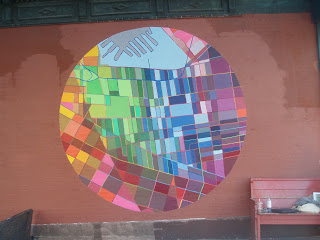 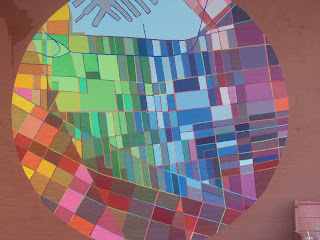 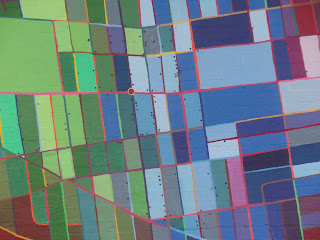 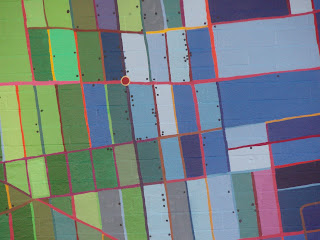 Thank you to everyone who participated!  We got a lot of dots and will offer another chance to add your home to the map in a couple of weeks...
Posted by Ellie Balk at 9:55 AM No comments:

Here is the first take of the video in progress.  For some reason the blog won't let me up load so here is a link to it on You Tube...
http://www.youtube.com/watch?v=V07Gvmdd1zE
Posted by Ellie Balk at 8:15 PM No comments: 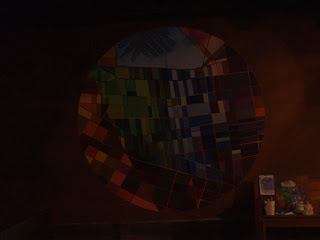 It's dark.  It was late.
After a long day of playing "I spy" for eye sores, it was to the point where we could say it's done, or it was just too dark to be a perfectionist.
Looking forward to Saturday for the addition of the dots!
Posted by Ellie Balk at 8:11 PM No comments: